Canadian dairy farmers are uniquely positioned to take advantage of renewable energy, with ready access to manure and crops that can be turned into biofuels, plus the ability to harness power from the sun and wind. Read on to learn more about how farmers in the Canadian dairy sector are embracing renewable energy.

Making the most of manure

You don't need to be an expert to know that dairy cows produce a fair amount of manure. It's a natural part of the process, and farmers use it as fertilizer on their fields. To take it a step further, some farms also install biodigesters, also known as anaerobic digesters, which take the methane emissions from manure and turn it into clean-burning biofuel – essentially, they're mini power-plants, with a few other added benefits. Talk about turning a messy situation into a bright idea!

Other benefits of biogas digesters:

Good for farmers, good for the planet

While dairy farmers are naturally committed to sustainability and motivated to reduce emissions, for many, biodigesters also present an economic opportunity. While the initial investment is significant, an average-sized biodigester can supply a farm with all the power it needs and more, reducing that farm's reliance on the grid. Where permitted, some larger digesters can even produce enough energy for the farmer to sell it back to the grid.

One dairy farm in New Brunswick produces enough electricity from biogas to power over 1,000 nearby homes and businesses – approximately 13 million KWh/year. At the other end of the spectrum, mini-digesters, like this one in Ontario, can produce about 20 kW of electricity, and can be set up more easily and at lower cost. As of 2016, there were over 60 agricultural and food-waste digesters in operation in Canada. ² 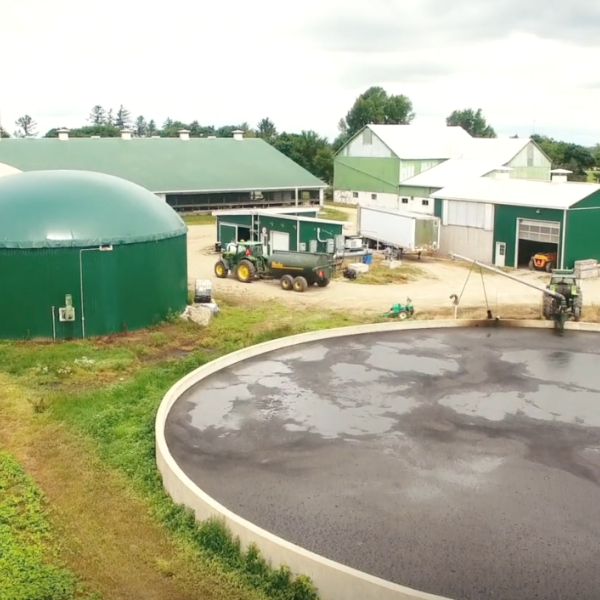 As dairy farmers continue to look towards the future with a focus on sustainability, incorporating biodigesters onto the farm is an opportunity to source additional revenue while doing good for the environment.

Apart from generating renewable biofuels, more and more farmers are also taking advantage of these other sources of green energy

In addition to producing quality Canadian milk, many Canadian dairy farmers have begun producing ethanol, as a byproduct of their crops. Ethanol is extracted from grains, such as corn, that dairy farmers are already growing for their feed. Because cows eat the whole plant of corn (as well as the leftovers from the ethanol-making process), this fits naturally and sustainably in the plans of many farmers in Canada. And it's a highly in-demand product: ethanol is included in all gasoline sold in Canada.

While all farmers are farming the sun by capturing sunlight and CO² from the atmosphere to grow crops and food, there is an additional way to harness the power of the sun for another type of energy Canadians depend on. Many farms in recent years have opted to install solar panels – typically, on the roofs of their barns and other outbuildings. This can immediately lower farms' energy costs (not to mention reduce their carbon footprint). And like biogas, solar photovoltaic systems can also be scaled up to produce excess energy, which, in many provinces, can be sold back into the grid – truly, an example of solar farming.

Farms in many areas in this country have one resource a plenty: the wind. Where winds are strong enough- for example on ridges, or wide open windy spaces, it makes sense to install wind turbines to harness that wind power and create green energy. As of 2016, there were over 1,500 farms in Canada harnessing wind energy.

Get inspiration on eating local, farm-to-table, and other sustainability and healthy eating trends.

The dairy industry’s total carbon footprint is only 1% of Canada's GHG emissions, and it's going down each year. Find out what we're doing to reduce emissions.

Think dairy farming is stuck in the past? Take a look at how technology is shaping the role of dairy farmers and the future of Canadian dairy farming.

Look for the Blue Cow logo

You may have spotted our logo on your favourite dairy products. Learn why it’s important to support Canadian dairy and seek out this logo.